The Empty Promises of the «Sovereign Money Initiative»

What is sovereign money?

Adopting the sovereign money concept would fundamentally change the existing monetary system. But what does the initiative want to change and how would the new system function? This chapter briefly describes the development of Switzerland’s monetary system, then explains the changes the initiators want to bring about.

Evolution of the existing monetary system

The existing monetary system is relatively young. With the onset of freedom of trade and industry, numerous public and private banks were established in many cantons in order to provide the population with a means for making payments. In addition to the new type of paper money (banknotes) issued by these banks, a large number of different coins were in circulation, including the «batzen» as the unofficial Swiss coin.

After the foundation of the Swiss Confederation in 1848, the sovereign right of coinage was initially assigned to the federal government, which then defined and minted Switzerland’s coins. Then in the early 1880s, the still relatively young Swiss Confederation made a further move in the direction of centralisation when it introduced regulations governing the issuance of banknotes, which was still more or less organised on the basis of market-economy principles.

It was only at the beginning of the 20th century that cantonal and private banks were prohibited from issuing banknotes, and the right to do so was assigned to the newly established Swiss National Bank (SNB).

Since 1907, the SNB has been responsible for creating central bank money. The central bank money supply, which comprises banknotes in circulation and current account deposits of banks at the SNB, is referred to as M0 and currently amounts to approximately 500 billion Swiss francs. The SNB puts money into circulation by, for example, buying currencies from the commercial banks against Swiss francs or concluding repo transactions. In view of the euro crisis, buying foreign currency is the SNB’s most important instrument today, whereas under normal market conditions, repo transactions are the leading instrument. Table 1 shows the respective balance sheets of the SNB and a commercial bank. In this example, the SNB buys foreign currencies from the commercial bank amounting to 50 million Swiss francs and thus extends its balance sheet by the same amount. At the commercial bank the transaction results in an asset exchange, with lower foreign currency holdings offset by an increase in current account deposits.

The SNB is able to bring Swiss francs into circulation by buying foreign currencies from a commercial bank.

In the existing system, in addition to the SNB, commercial banks also create money. They bring book money into circulation through the issuance of credits (cf. Table 2). If a bank issues a credit in the amount of 900,000 Swiss francs, it credits the corresponding amount to the client’s account in the form of a sight deposit. Together with cash at non-banks, these form money supply M1 and are available for payment purposes. M1 currently amounts to around 600 billion Swiss francs.

The creation of money by commercial banks is subject to clear limitations. In order to prevent themselves from getting into difficulty, these banks have to ensure that borrowers are in fact able to repay their loans. This means that most loans have to be adequately secured, for example in the form of real estate or securities. Commercial banks are also obliged to cover a certain portion of customer deposits with reserves, as well as to comply with liquidity and capital regulations. Finally, with its range of monetary policy instruments the SNB is able to steer interest rates on the money market and thus indirectly control the money supply via credit demand.

Creation of book money by commercial banks through lending

The Sovereign Money Initiative aims to change the existing monetary system in two ways. Firstly, it wants to prohibit commercial banks from creating money in that it would assign the book money monopoly to the SNB. In this way, the SNB would be the sole institution permitted to put money into circulation. Commercial banks would only be allowed to grant loans on the basis of savings that cannot be withdrawn for a certain period of time. These banks would have to book this money outside their balance sheet on a newly created payment account that is similar to a custody account. And secondly, the initiators want to change the way in which money is brought into circulation and are calling for the SNB to create sovereign money without buying anything and without receiving a countervalue. It is to be permitted to define sovereign money as an asset, and to pay it out debt-free to the government and the population, and thereby control the monetary circulation.

Table 3 shows the balance sheet mechanism. Because the SNB is authorised to issue legal means of payment, it is able to credit debt-free money to itself to the tune of 10 billion Swiss francs on the assets side, and thus increase its equity by the same amount. It can now distribute this money, which has been created out of nothing, to the government and the population. Its assets and equity then decrease again as shown in Table 4, and the government and population now possess an additional 10 billion Swiss francs.

According to the initiators, this solution will result in a crisis-proof payments system because bank runs would then be a thing of the past. The banking system would be more secure and the «too big to fail» problem would be greatly eased. Furthermore, the population would benefit from the distribution of seigniorage by the SNB.

According to the initiative, only the SNB is to create money in the future by extending its balance sheet. 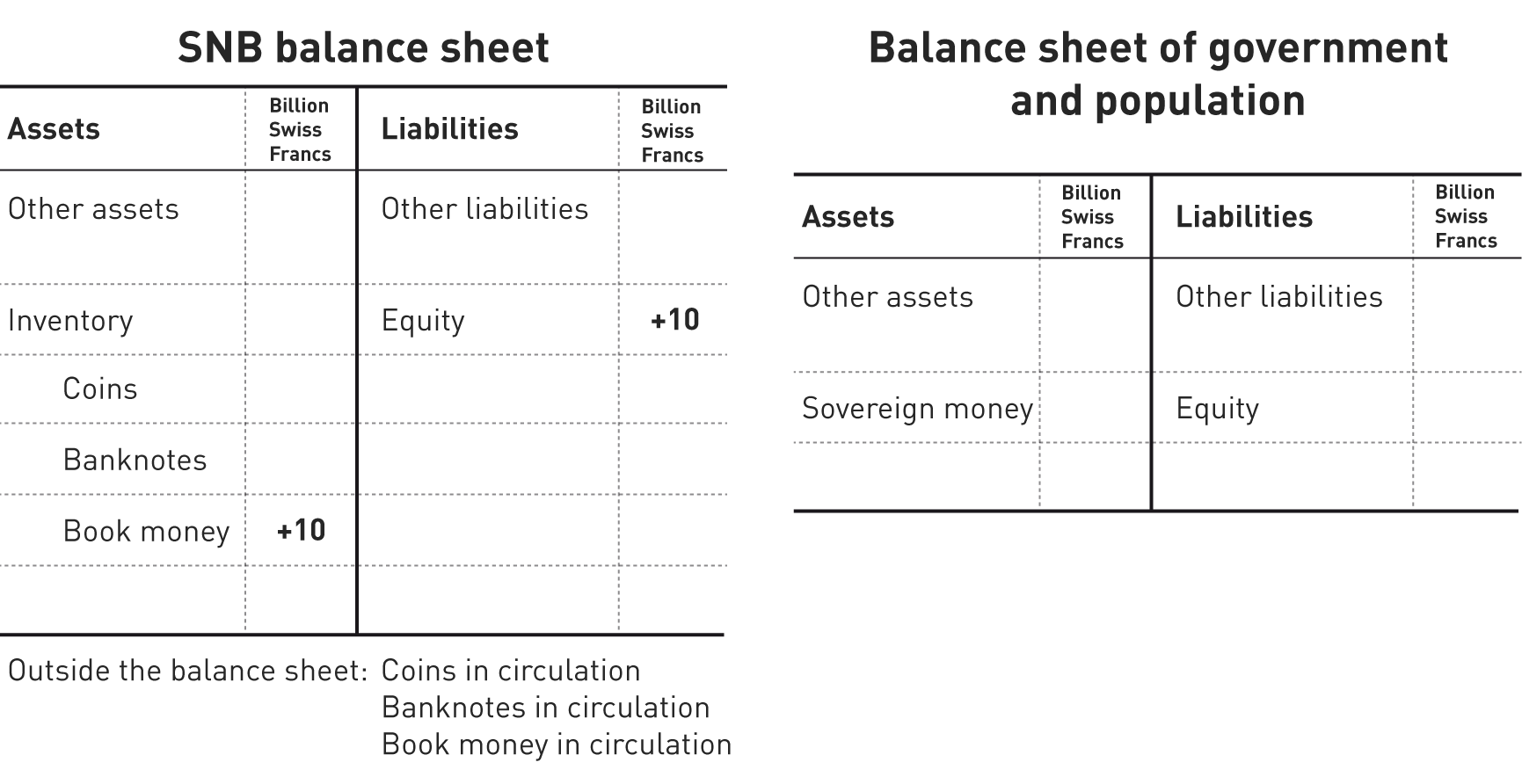 This book money is then distributed to the public.

Distribution of book money to government and population 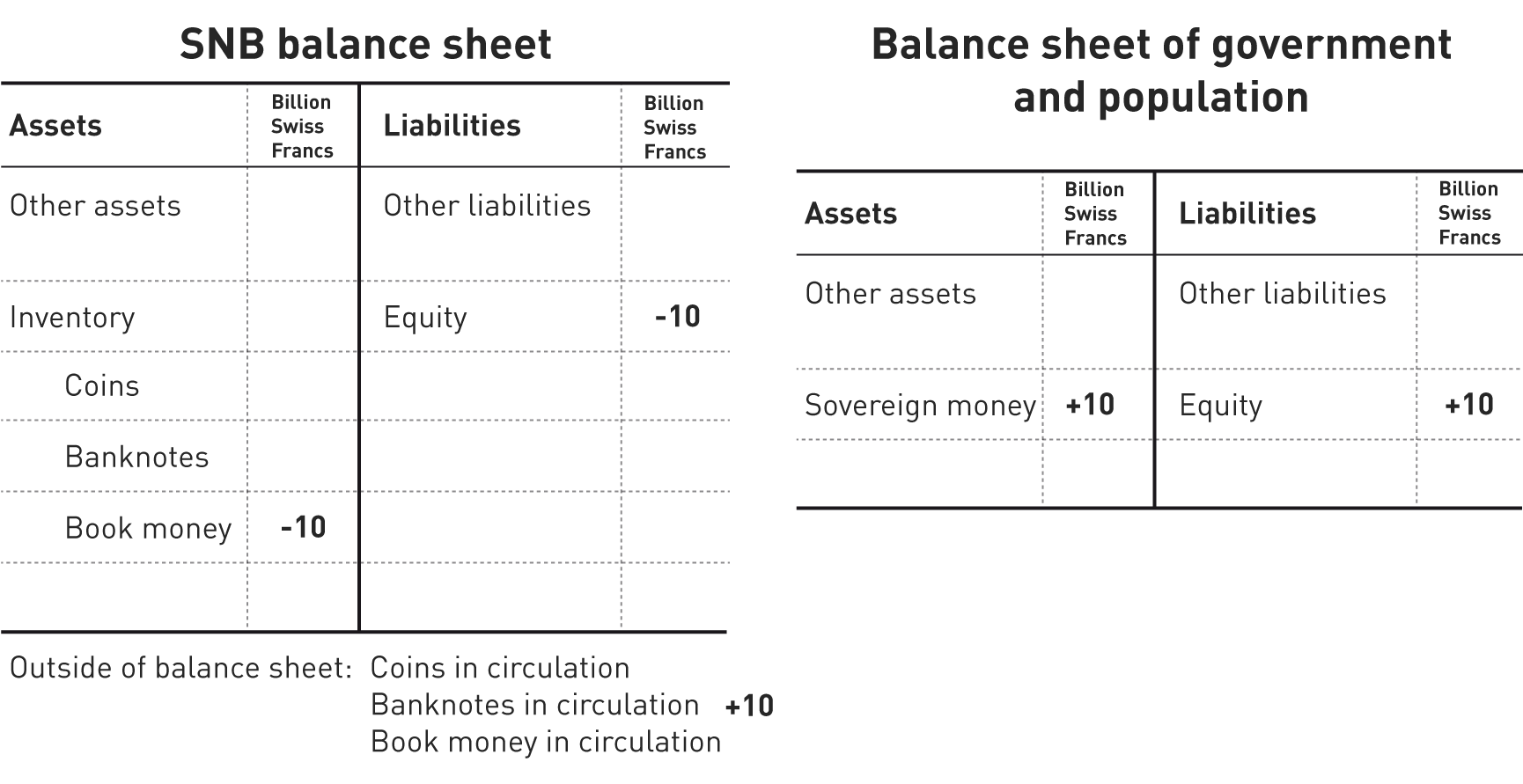 The sovereign money concept is often confused with a monetary system that calls for banks to hold 100 percent reserves. The most widely known draft for a 100 percent reserve system (also referred to as 100 percent banking, 100 percent money or full reserve) is the Chicago Plan dating from the 1930s. Despite certain similarities, the two monetary systems differ in terms of their fundamental concept. Whereas sovereign money itself is a financial asset and is listed outside the bank’s balance sheet, the 100 percent money system obliges the bank to fully cover its sight deposits with central bank money. Sovereign money can only be created by the central bank, whereas with the 100 percent money system banks can still bring money into circulation in the form of loans against interest. Thus under the Chicago Plan, money remains a debt and not a financial asset.

Continue to chapter 3
Introduction
up