Switzerland and the United Kingdom: joint efforts for a prosperous future

Calling for further deepening of relations with the UK

As already mentioned, the exit of the United Kingdom from the EU confronted both the British and the Swiss economy with a multitude of challenges. Now the focus must be on further deepening bilateral economic relations. Concrete steps in this direction have already been taken.

Switzerland and the United Kingdom are among the strongest financial centres and largest exporters of financial services in the world (see next chart). In view of these strengths and the fact that there are still considerable gaps in the bilateral treaty basis in this sector in particular, the financial and insurance industries of both countries have been campaigning for a comprehensive agreement for some time. The key points and priorities in this regard have been developed by economiesuisse and TheCityUK in a comprehensive position paper.

Switzerland and the United Kingdom have the strongest financial centres in Europe and are also among the world leaders. A bilateral financial services agreement will further strengthen international competitiveness of both countries. 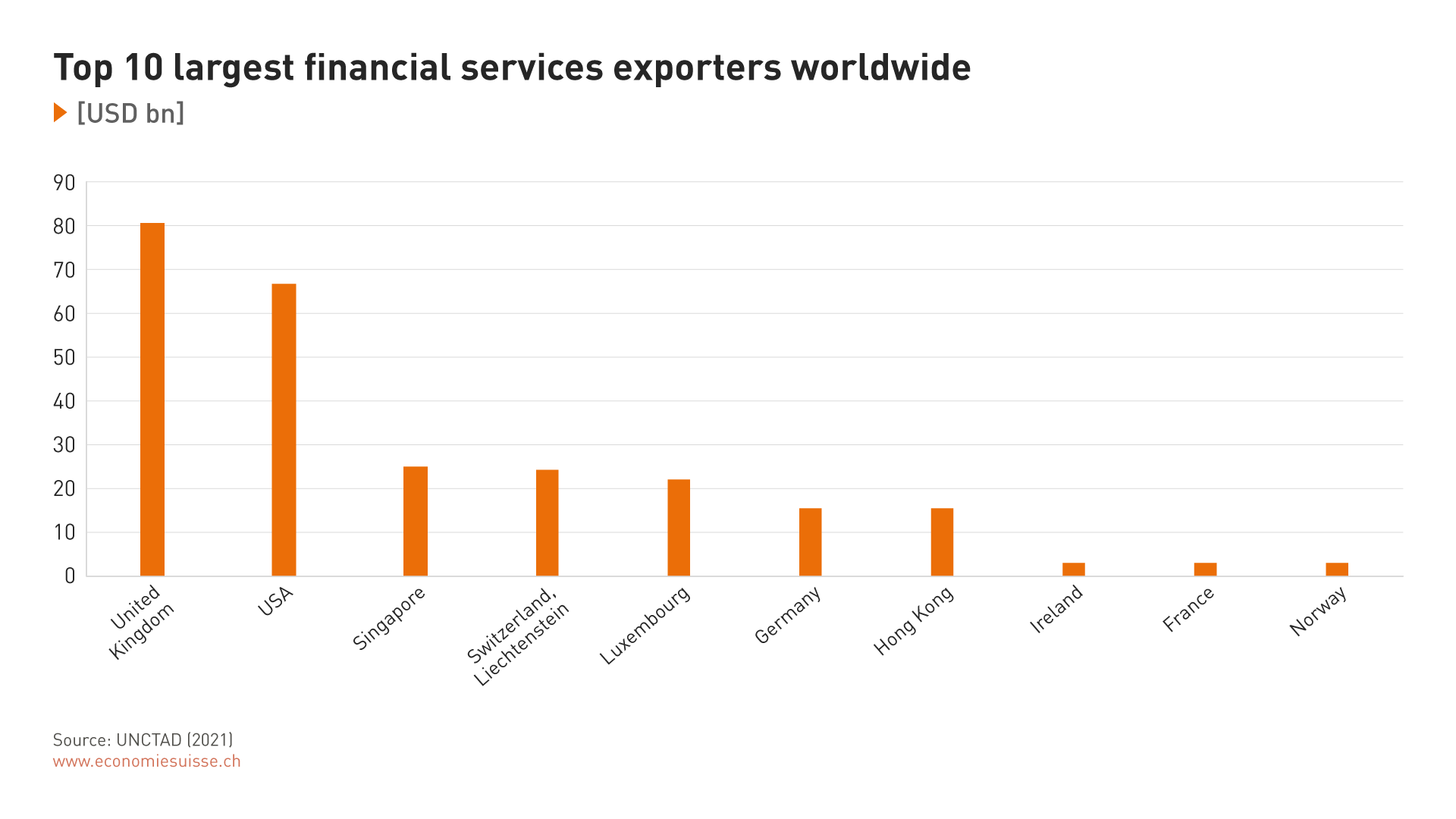 The principle of unilateral equivalence recognition of financial services, as applied by the EU so far, is not sufficient for Switzerland and the UK. This is due to the comparable approaches to financial market regulation and similar general supervisory regulations. Instead, mutual market access should be expanded – especially for banking and investment services, asset management, insurance and financial market infrastructure. The key principle should be mutual recognition of the relevant national regulatory requirements to the greatest possible extent. Moreover, from the point of view of the economy, this should be done on the basis of comparable results of regulation instead of identical regulations. Equally central is a deeper regulatory cooperation between the supervisory authorities of both countries. In addition, topics such as data and cyber security should be covered and stronger cooperation with a view to global regulatory standards and future liberalisation in the financial sector should be sought. Separate agreements may be necessary for this.

At the political level, finance ministers Ueli Maurer and Rishi Sunak underlined their intention to deepen financial relations in a joint declaration on 30 June 2020. Since the beginning of 2021, intensive negotiations have been underway with the close involvement of the relevant industrial sectors from both countries. The task is complex, and there are no precedents. However, important fundamental questions have already been clarified in recent months. At a meeting on 8 December 2021, the two finance ministers expressed the expectation that the negotiations would be concluded by the end of 2022. Now it is a matter of fleshing out the sector-specific market access aspects and the regulatory areas concerned. In parallel, the assessments of the supervisory authorities for the identified regulatory areas, which are to be recognised as equivalent, will be initiated. For the business community, it is important that the negotiation dynamics, the level of ambition in terms of content and timeframe, as well as the close involvement of all relevant sectors, are maintained until the end.

If this succeeds, Switzerland and the United Kingdom would present the world’s most comprehensive market access agreement in the financial sector between two countries. Together with a speedy ratification in domestic politics, this would also be a strong signal against international fragmentation and market foreclosure.

Bringing the bilateral trade agreement into the 21st century

The trade agreement between Switzerland and the United Kingdom primarily safeguards what has been achieved so far, therefore requires comprehensive consolidation. Talks on this have now begun at the political level. The Swiss business community sees the following areas for action in this regard:

The bilateral trade agreement primarily safeguards what has been achieved so far. Its comprehensive deepening and a stronger collaboration on important issues for the future will bring lasting benefits for both sides. 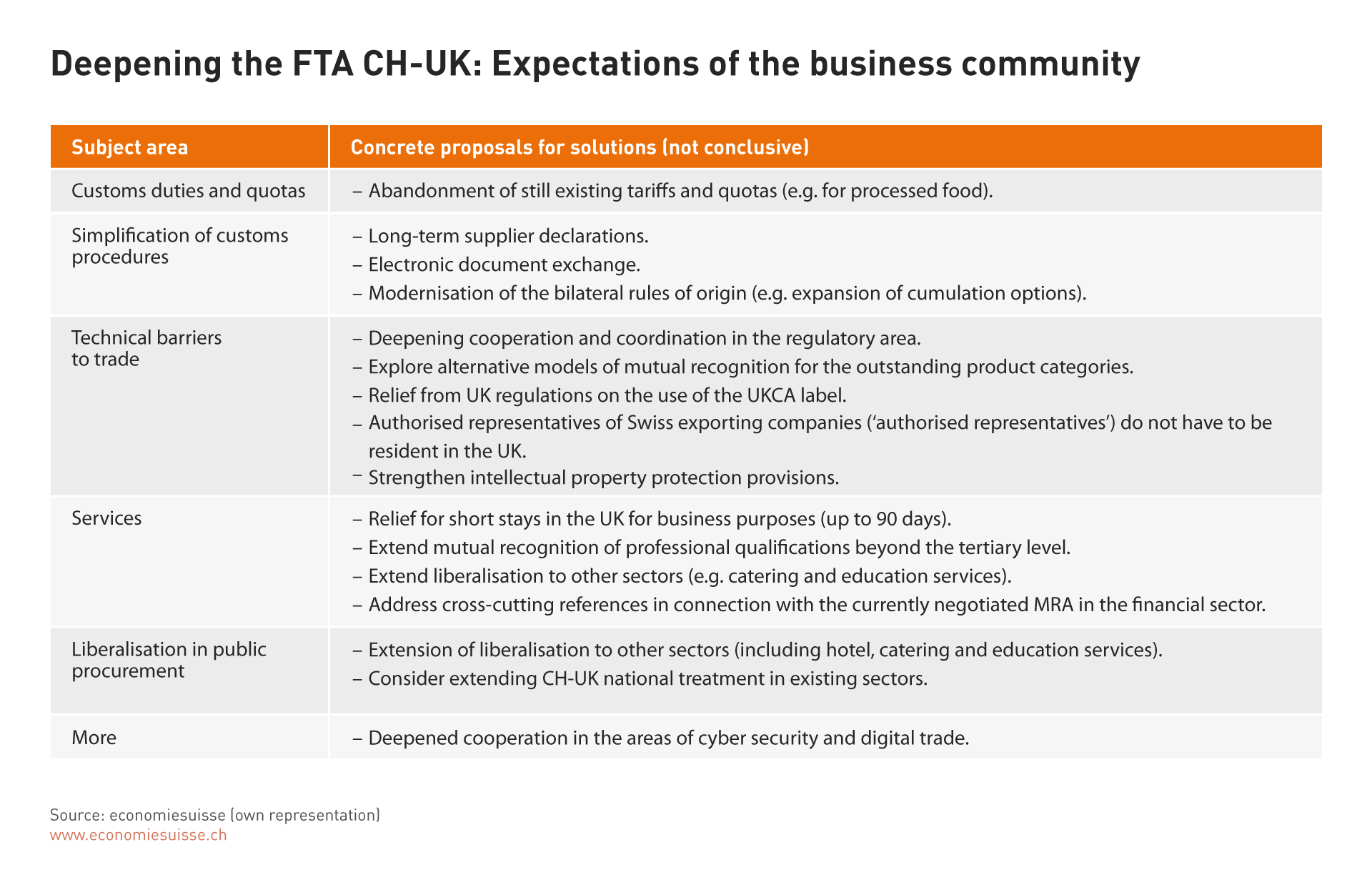 The listed areas can also be addressed in separate agreements.

Even with a comprehensive deepening of the trade agreement between Switzerland and the UK, problems remain. These cannot be solved within the framework of CH-UK bilateral relations, but only by taking into account all parties concerned.

Regarding trade in goods, the accession of the United Kingdom to the PEM Convention would be beneficial for Switzerland in the area of cumulation of origin. In combination with an adjustment of the rules of origin in the EU-UK TCA, this could close the remaining cumulation gaps for Swiss companies in Europe. Furthermore, continental harmonisation in at least data protection is important for cross-border economic networks.

The accession of the United Kingdom to the Lugano Convention would also be welcome. The agreement between Switzerland, Norway, Iceland and the EU ensures that judgments in civil and commercial matters can be mutually recognised and enforced by courts of the signatory member states. It thus increases legal certainty for the contracting parties. So far, the EU, also a contracting party to the Convention, has spoken out against such accession.

Deepen bilateral cooperation on issues of the future

Switzerland and the United Kingdom are among the most innovative economies, have the strongest financial and research centres in Europe and are also leaders in the manufacturing industry in many sectors. It is therefore obvious that for the two states there is also interesting potential for cooperation beyond classical trade policy.

Increased bilateral cooperation between British and Swiss universities and research institutions should be mentioned here, as well as a number of future topics in the financial sector (e.g. fintech, sustainable finance) and digitalisation (e.g. artificial intelligence, blockchain). Both countries are also able to provide valuable impetus to the global development of technical standards. Within the framework of their activities in international organisations (e.g. WTO, OECD), there is also the opportunity to better assert common concerns through stronger coordination of their activities. This can involve trade, climate and sustainability issues, but also other economic policy topics of European or global significance.

Finally, another special feature of bilateral CH-UK relations is the fact that, since the Brexit decision in 2016, not only have exchanges at governmental and administrative level deepened significantly but there have also been numerous contacts and discussions between the economic actors of both countries at various levels since then. This intensity is also extraordinary in comparison to other economic partners of Switzerland and has sustainably strengthened mutual understanding and trust.

Despite the great potential for the future in bilateral relations, there is currently no platform that enables a constant exchange between politicians and the private sector in both countries across all relevant sectors and government agencies. That is why economiesuisse and the Confederation of British Industry (CBI) are launching a Bilateral Trade and Investment Council in 2022 to fill this gap. The aim is to bring together high-ranking government, administrative and business representatives from both countries on a regular basis.

With the participation of the member associations and companies, current challenges in bilateral trade are to be discussed together, opportunities for the further deepening of relations are to be identified, and the potential for cooperation in economic and political trends is to be explored. In this way, the Swiss and British private sectors are actively contributing to ensuring that the current momentum in bilateral relations can be used successfully for both sides.

Continue to chapter 4
Introduction
up