The direct impact of the sanctions on bilateral trade relations with Russia and Belarus in the context of the war in Ukraine is minor. Nevertheless, individual companies with a strong presence in these markets are likely to be significantly affected. Overall, the indirect effects of the war in Ukraine are potentially more serious for the economy as a whole. These include logistical problems, supply chain disruptions (e.g., industrial input materials, raw materials, food, and energy sources) and increasing prices.

Economic impacts, however, have taken a back seat in view of the humanitarian catastrophe in the war zone. Many Swiss companies have responded to the war in Ukraine with a major humanitarian commitment which is playing out in Ukraine itself, in Switzerland and along the refugee routes to Western Europe. Specifically, the support includes in-kind contributions such as medicines, food, clothing or living space for refugees. Considerable financial donations are also made to aid organisations and foundations. Various companies also allow their employees to volunteer during working hours.

The brief survey by economiesuisse on the humanitarian engagement of Swiss companies in connection with the war in Ukraine shows that the private sector, in particular, can make a valuable contribution to alleviating the immediate hardship of the people affected in the war zones and on the run. Many companies are proactively engaged in alleviating the suffering of victims and take their social responsibility beyond pure business interests. It is to be hoped that the findings from the survey will also motivate other companies to get involved – not least because the need for support is likely to increase as the war drags on.

Sanctions are in line with neutrality

Switzerland's Federal Constitution emphasises the importance of neutrality for its external security. Neutrality has also been internationally recognised since 1815 (Congress of Vienna). To parts of the public, Switzerland's sanctions against Russia are sometimes seen as a surrender of Swiss neutrality. Based on facts, this is not the case.

Currently, Switzerland has sanctions in force against a total of 22 countries and two sanctions against individuals and organisations. Other neutral states have also taken sanctions against Russia and Belarus (e.g., Austria). Neutrality is not defined by the sanctions issue. Nor is the provision of "good offices" restricted by sanctions. For example, Switzerland is currently a protecting power for Russia in Georgia, for Georgia in Russia or for the USA in Iran.

On the contrary, in view of the dramatic situation in Ukraine, Switzerland's non-response would be inconsistent with its neutrality and humanitarian tradition. Such behaviour would indirectly support the Russian war of aggression and would be incomprehensible in view of Russia's blatant violations of international law. However, this is precisely what a neutral Switzerland depends on, namely compliance with international provisions by the community of states. 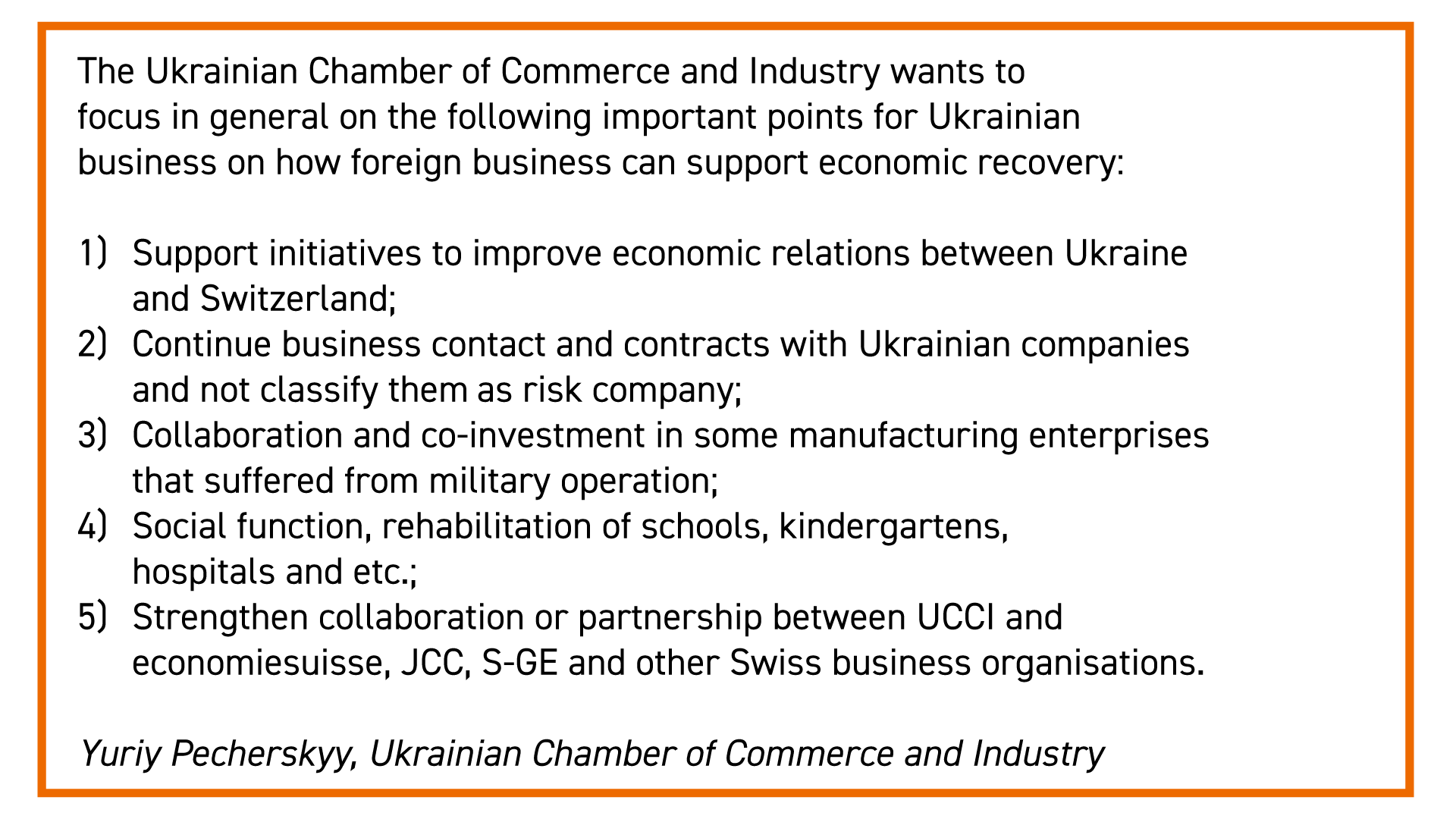 Despite the great importance of humanitarian support, it is essential to create sustainable prospects for local companies and employees as soon as possible. In the long term, foreign direct investment in Ukraine is also an important prerequisite to strengthening the local reconstruction and economic integration into global production, logistics and development networks after the dramatic collapse of economic activity because of the Russian invasion. This would also support the rapid economic recovery of the affected regions. It is to be hoped that Switzerland's bilateral economic relations with Ukraine can also continue their positive trend that existed until the war began.

In view of the global economic disruptions, the great uncertainties in foreign policy and the dramatic humanitarian situation in Ukraine, politicians are called upon to do everything in their power to bring about a swift end to the war.