Brexit will have far-reaching consequences not only for Great Britain and the EU. With its close economic integration Switzerland is also deeply affected by the UK’s withdrawal from the EU. Liberal economic systems and open markets enjoy high priorities for both Switzerland and the UK. Brexit effects will be different for each business and industry. Switzerland will also be watching closely how the politics of Brexit affect its own ongoing negotiations with the EU (e.g. Initiative against mass immigration or institutional framework agreement).

As the number of daily non-stop commercial flights (80) between the two countries indicate, Great Britain is a vital partner for Switzerland in terms of trade and investment. Since 2011, the bilateral trade in goods has more than doubled. Today, the only country with which Switzerland has an even better trade balance are the US (+CHF 5 billion UK; + CHF 16 billion US, precious metals not included).

Favored goods in the trade with Great Britain are chemical and pharmaceutical products, machines and vehicles, as well as watches and watch components. 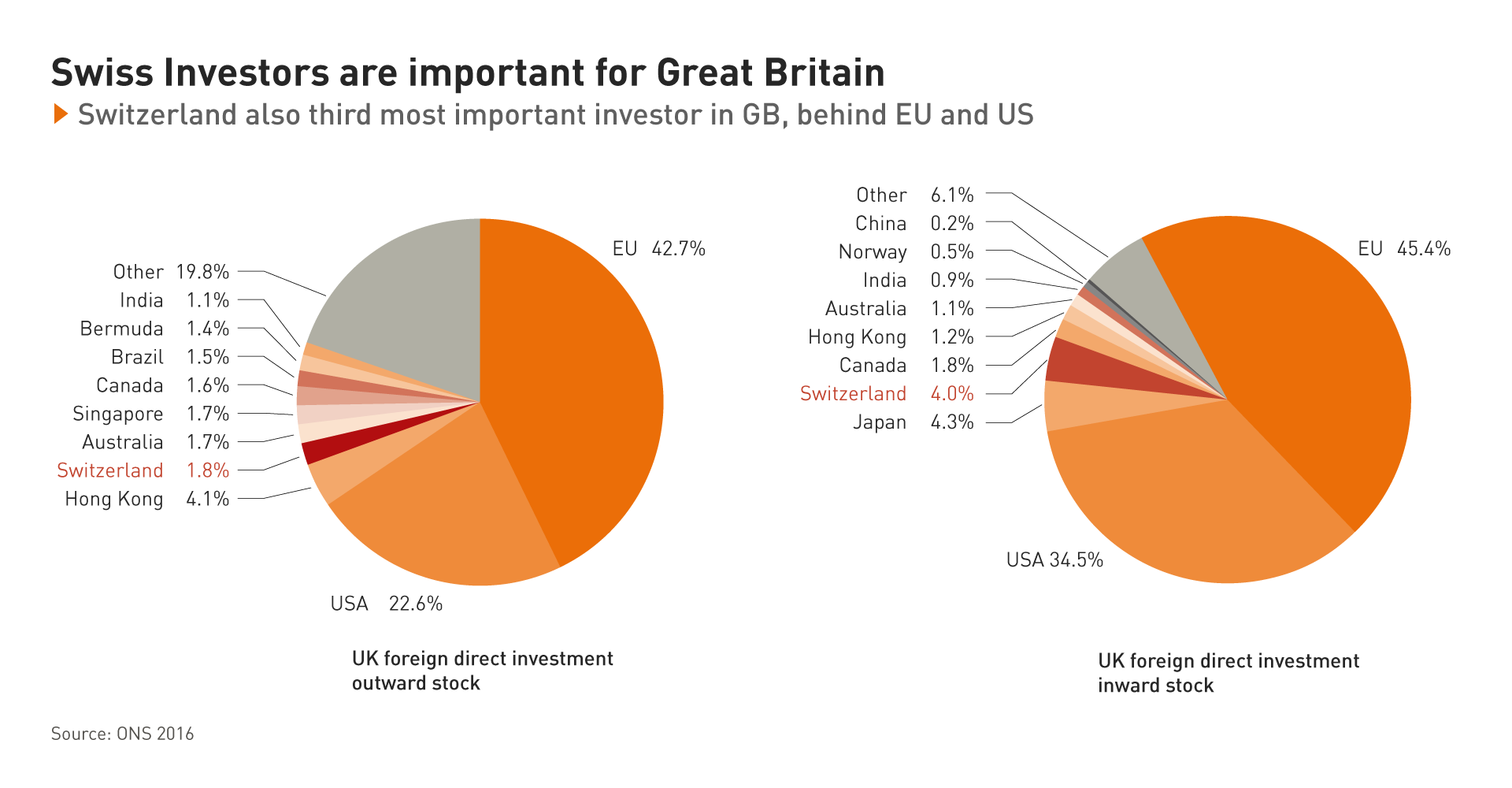 In 2016, the total value of goods imported to or from Great Britain was 11 billion CHF. Trade favorites are chemical and pharmaceutical products, machines and vehicles, as well as watches and watch components. Measured by these numbers Great Britain is the fifth most important trading partner for Swiss companies. Not included in these numbers is the trade in precious metals with a total value of 32 billion over the same period.

Great Britain is the fifth most important export market for Swiss business. 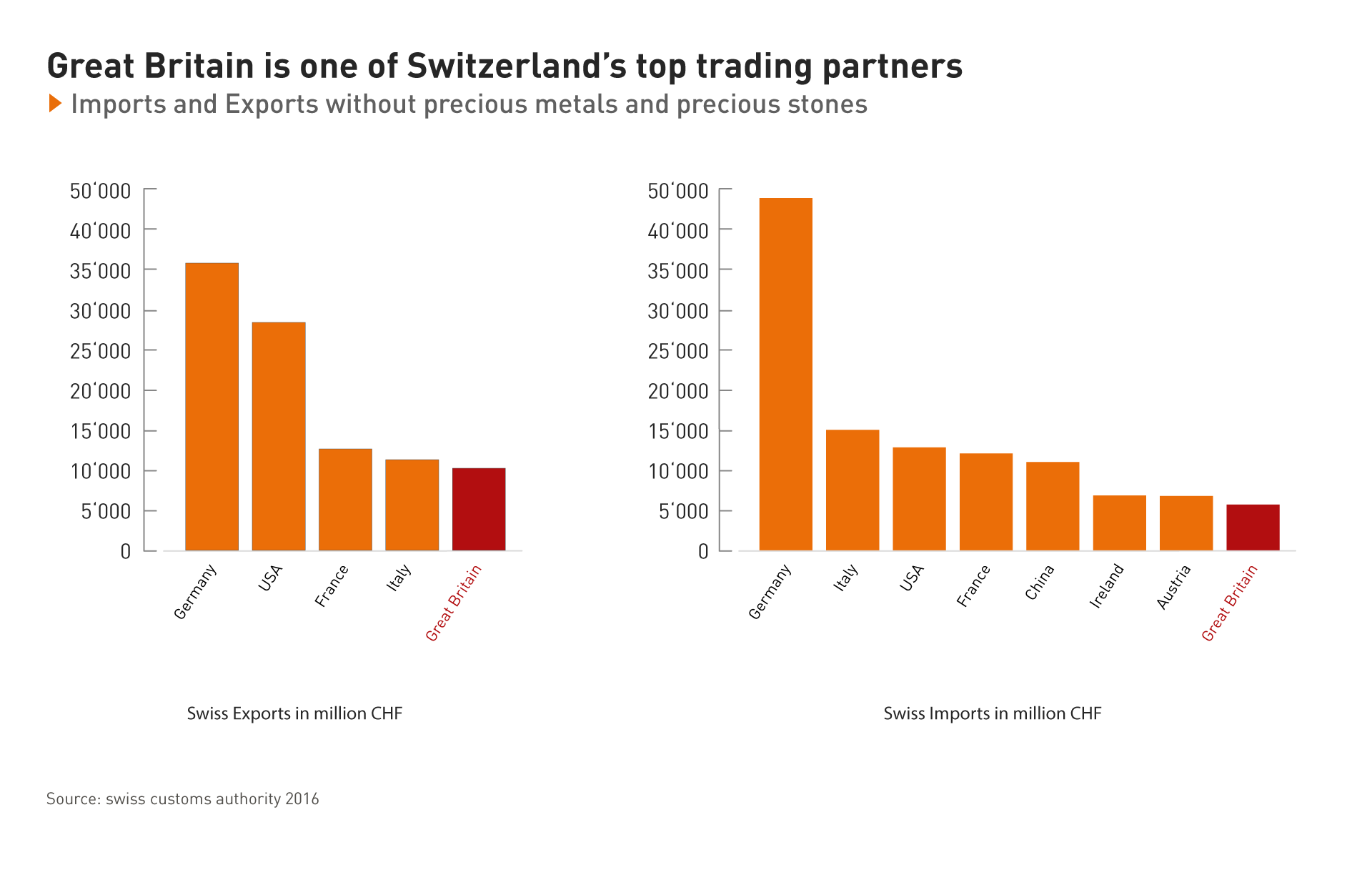 The service trade with Great Britain is also significant and broadly diversified according to the numbers provided by the Swiss National Bank. From 2012-15, exports increased by 20 percent to CHF 8.1 billion. Service imports declined by 3 percent over the same period (2015: CHF 6.3 billion). Direct investments[1], too, highlight the close economic relationship: for Swiss companies the UK is the fifth most important destination for direct investments — behind the US, Luxembourg, the Netherlands and Ireland. The capital stock of these companies in Britain in 2015 (CHF 51 billion) was substantially higher than the amount in Germany (CHF 38 billion). At the same time, the large number of British companies based in Switzerland are very important for the ‘business location Switzerland’. With almost CHF 31 billion in direct investments they are more important than their Italian counterparts and rank sixth in the list of top investor countries. On the other hand, Swiss companies currently employ 92,758 people in Great Britain which is almost four times as many as work for British companies in Switzerland (26’690).

Swiss direct investments in Great Britain are significantly larger than in Germany. 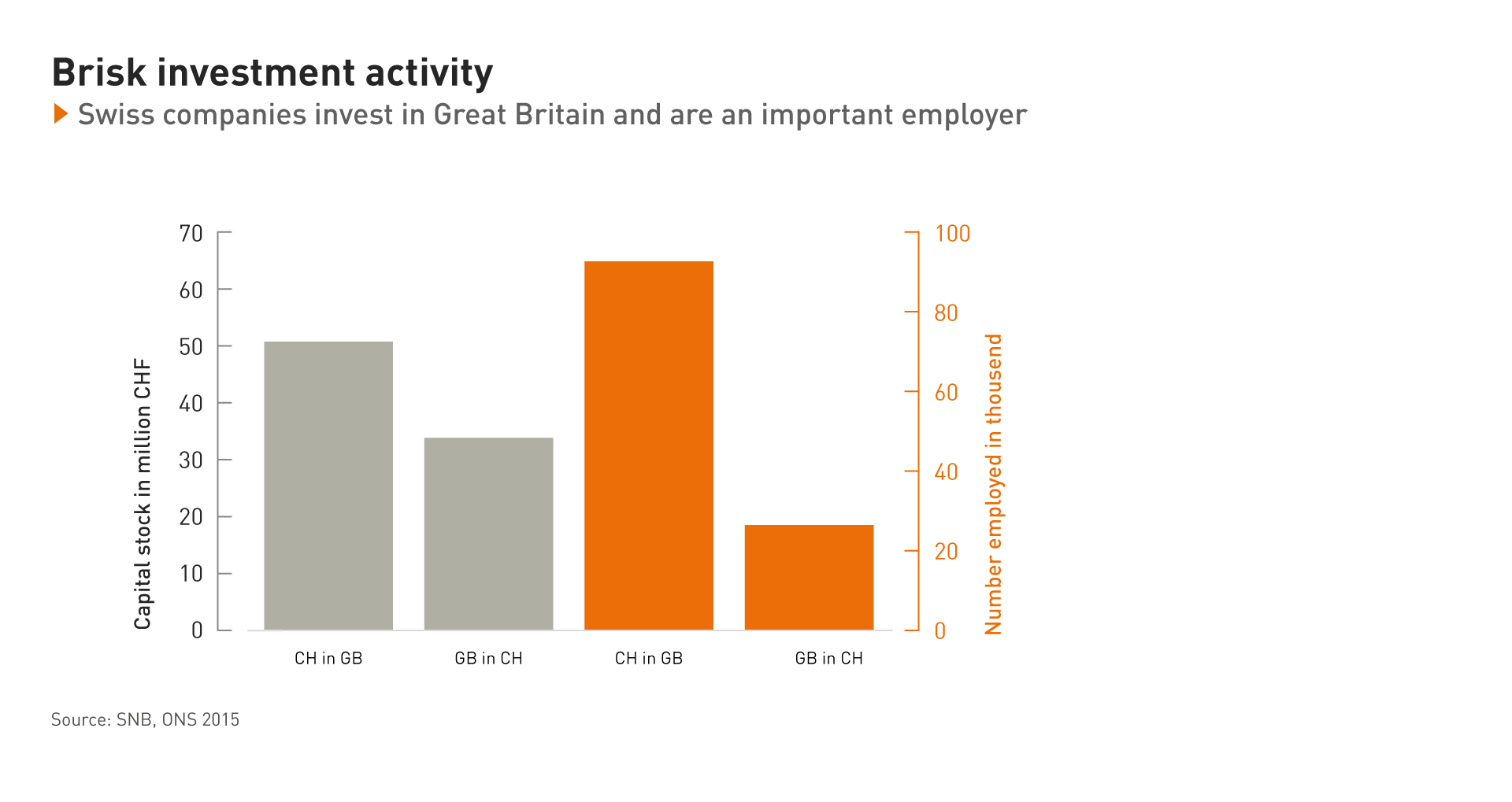 The economic ties between the two countries are by no means negligible from a British perspective either. In 2016, Switzerland was the sixth most important export market for British goods. In the import column Switzerland ranks eleventh among the most important importers to the UK. Behind China, Switzerland is the strongest growth market for UK exports.

Switzerland is the number three export market for goods and services. 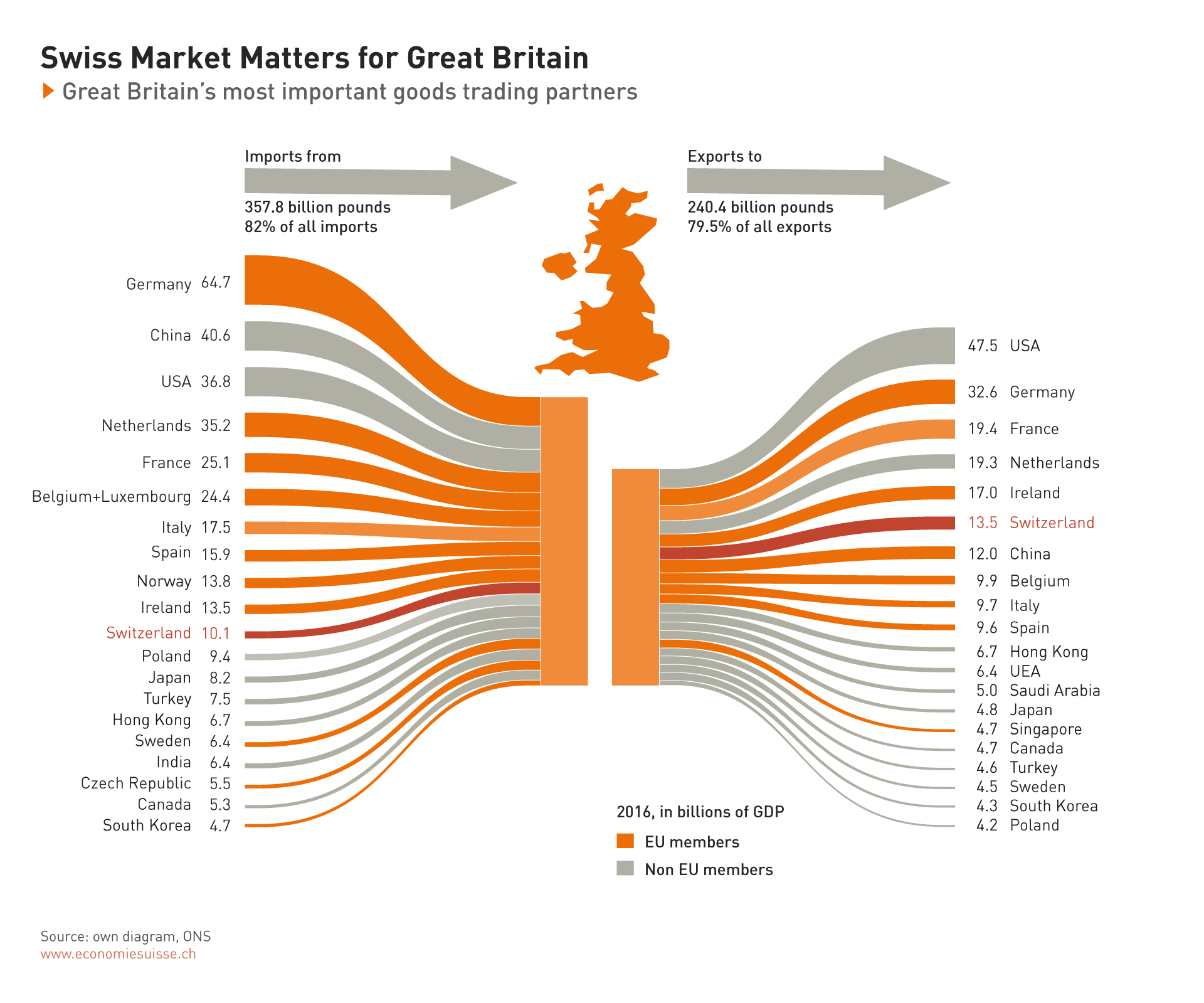 The service sector is also very significant for both countries. Here Switzerland has an important position as a target market for British companies. In 2014, Switzerland was Britain’s third most important export destination for services — some CHF 11 billion total (without tourism, transport and banking). In the import column Switzerland ranks sixth with CHF 2.7 billion[1]).

Swiss companies rank third in direct investments behind the EU and the US. 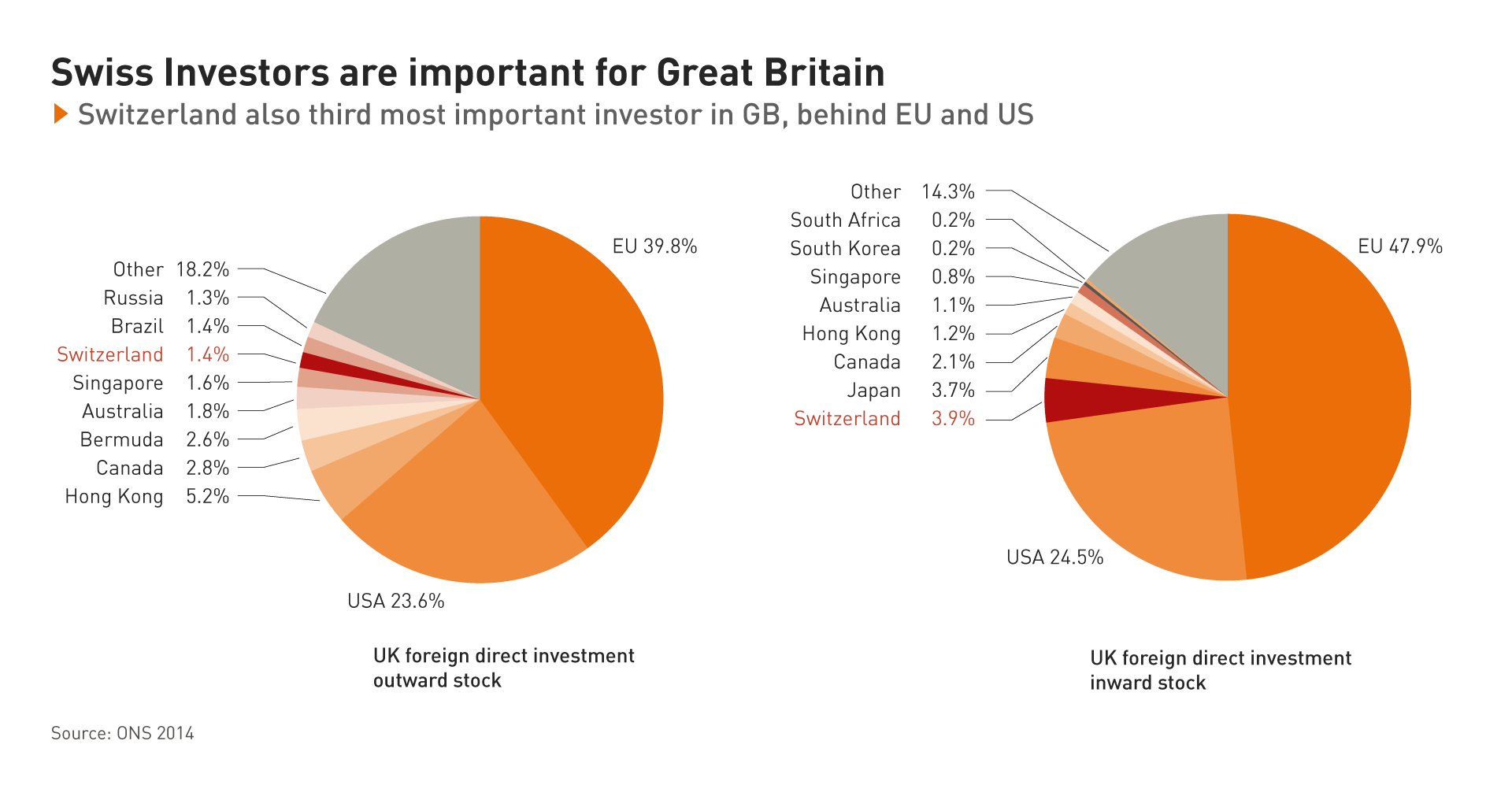 The Need for a New Agreement with Great Britain

With the UK’s entry into the EU in 1973 the contractual relationship between Switzerland and Britain changed fundamentally: In all areas of the law where Great Britain ceded authority to the EU, the latter assumed the task of negotiating new treaties and agreements on behalf of its member states — including those involving Switzerland. Currently, more than 100 bilateral treaties grant Swiss companies the same privileged access to all EU member states. With Great Britain’s withdrawal from the EU, the entire library of treaties between Switzerland and the EU will no longer be applicable to the UK according to article 50 of the Treaty of Lisbon.

Without some sort of follow-up treaty both countries will have to resort to existing multilateral agreements (e.g. WTO) and a small number of bilateral treaties. Some of these date back to the 19th century and for the most part do not meet the requirements of today. Besides, they do not address key economic issues for the most part. Swiss companies would find themselves at a great disadvantage in such vital matters as market access, technical trade impediments, public procurement, and issues regarding the movement of goods and persons. This creates great legal uncertainty.

Since Switzerland is very much interested in preserving its close relations to Britain it needs to be perceived as an active and constructive partner with definite positions. The Federal Council has closely followed the discussions and events in Great Britain over the last few months and has established contacts with the British government through various channels in order to discuss the way forward. An inter-departmental working group is also following the exit negotiations and drawing up proposals for future relations. The group regularly consults with business leaders.

Brexit also affects Switzerland's negotiations with the EU about the further development of the bilateral treaties. The EU is currently taking a hard line with Switzerland and Great Britain. This dogmatic attitude has a lot to do with with the present lack of clear EU positions in key areas. This will change as soon as the EU defines its core points in the Brexit negotiations and addresses the need for internal reforms.

Here the EU faces a particular challenge because concessions to Switzerland might compromise its position in the withdrawal negotiations with Great Britain in 2017. Before the referendum the EU offered Great Britain specific enticements. After the vote of June 23 these obviously no longer apply, but they did define a framework for negotiations. Since migration policy will remain a contentious issue in the EU it seems safe to assume that adjustments are forthcoming. At the same time the EU itself is keen on finding a viable solution in its clash with Switzerland over migration policy before the start of its intensive withdrawal negotiations with Great Britain.

Whether or not Great Britain will seek to join the EFTA in the medium term is still an open question. If the EU were to commit to serious reforms this might also affect the role of EFTA in Europe's future. In the discussions about Brexit the possibility of Britain joining EFTA has come up. In fact, Great Britain was one of the founding members of European Free Trade Association in 1960, which it eventually left to join the EU. EFTA currently has four members (Switzerland, Norway, Iceland, Liechtenstein) and a wide-ranging network of 27 free trade agreements with 38 states. Member states remain free to pursue their own trade policies and bilateral free trade agreements.

Like the EU, EFTA also maintains a wide network of free trade agreements.

Most industries expect a decline of market dynamism in business with Great Britain.

Continue to chapter 4
Introduction
up