Brexit: a “moving target” for the Swiss business sector too

Mixed picture for trade after Brexit

In 2017, the UK was among Switzerland’s top five export markets for goods, services and direct investments. Economic ties between the UK and Switzerland are thus still close. Nonetheless, based on the current figures, the picture with respect to trade is mixed. While goods exports fell in terms of value, services increased substantially. 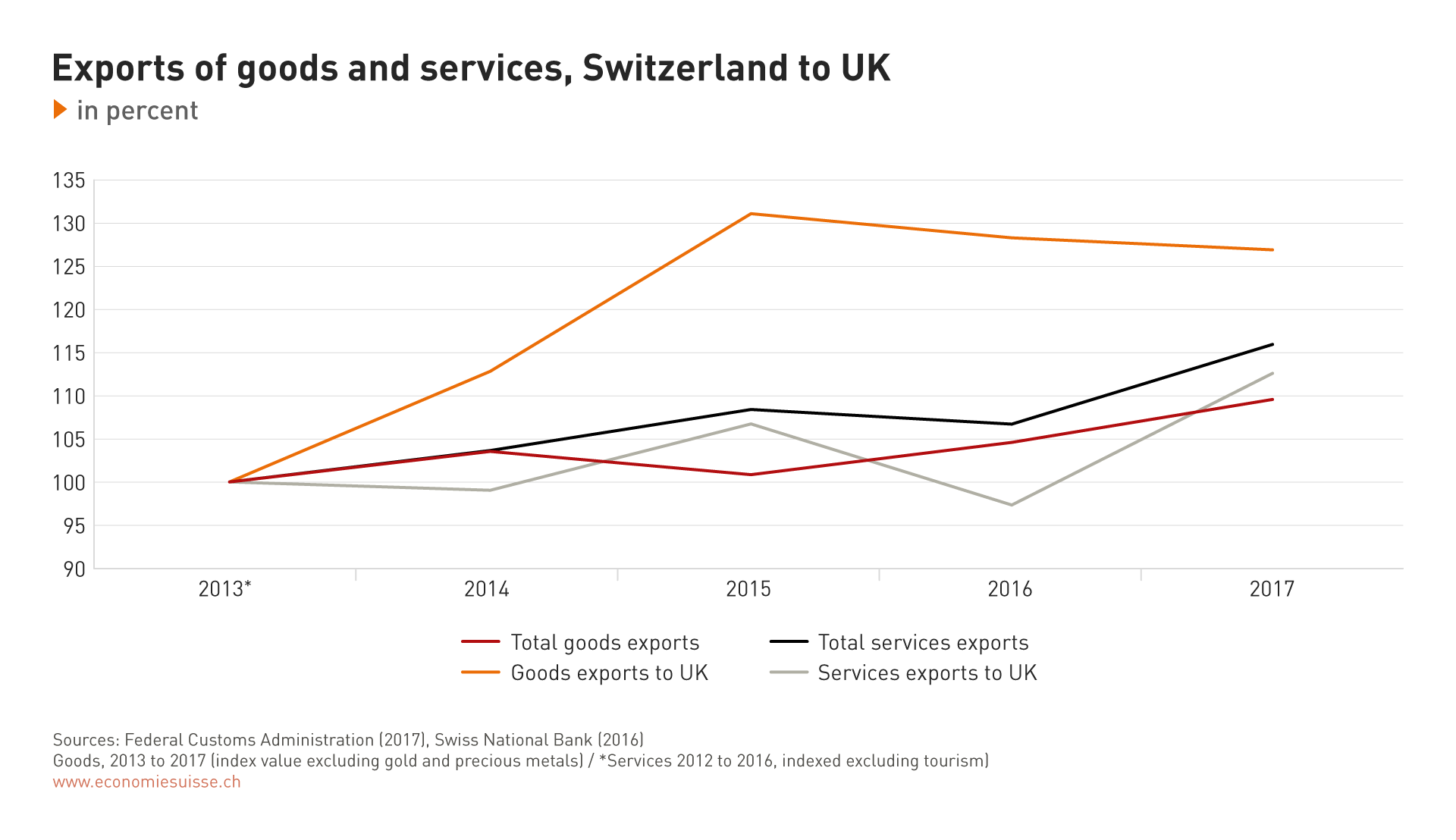 In the goods sector, imports fell by 5 percent and exports by 1 percent. This trend can to some extent be attributed to the weakening pound in the context of Brexit. Since the milestone decision to leave the EU was taken on 23 June 2016, the pound has dropped sharply versus the Swiss franc (periodically by as much as 18 percent). In 2017, the most important categories of exports from Switzerland to the UK included chemicals and pharmaceuticals, machinery and watches, as well as financial, ICT and consulting services. 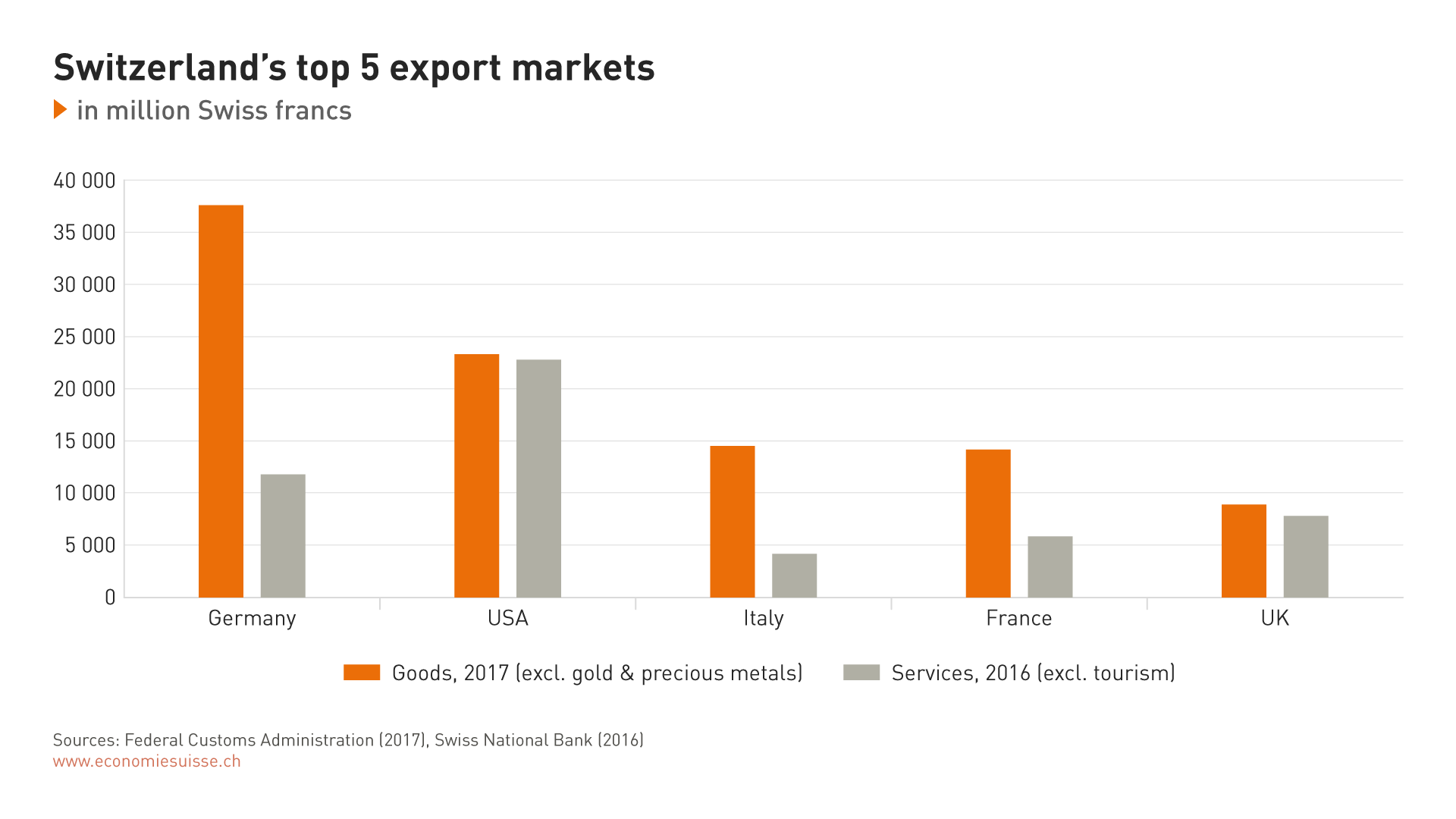 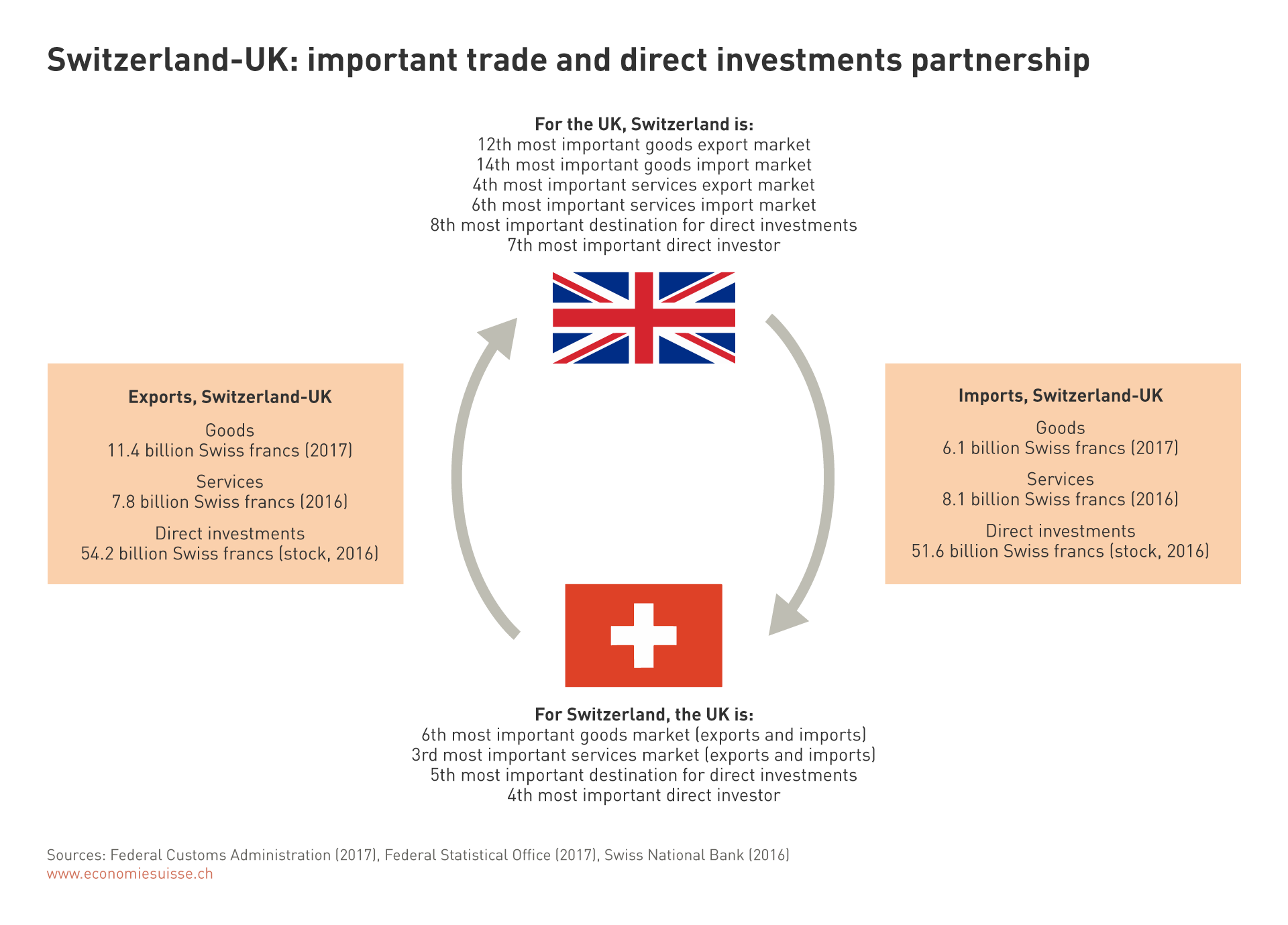 Imports of services from the UK fell considerably more sharply (-7 percent), while Swiss exports of services to the UK rose by around 15 percent versus the previous year. Here, the most notable trends concerned consulting services (exports +59 percent) and research and development (imports -47 percent). According to the latest figures, the volume of trade between Switzerland and the UK totalled more than 33 billion Swiss francs. This does not include trade in gold and precious metals worth around 18.4 billion Swiss francs. The latter are of particular significance with respect to imports and were more than twice as high as the other goods imports.

The volume of direct investments and the associated number of employees are also important aspects. According to the figures published by the Swiss National Bank, Swiss companies employed a total of 96,138 people in the UK in 2016, while the number of people employed by British companies in Switzerland in the same year was 26,690. The value of Swiss direct investments in the UK reached 54.2 billion Swiss francs in 2016 (+10 percent versus 2015). The trend with respect to the value of direct investments in Switzerland from the UK was also positive (51.6 billion Swiss francs). Corresponding figures for 2017 from which initial conclusions could be drawn regarding the impacts of Brexit on direct investments are not yet available.

Positive trend with respect to air travelAs a rule, in the civil aviation sector an economic slowdown goes hand in hand with downward trends in both the freight and passenger segments. To date this cannot be ascertained with regard to the UK. On the contr

As a rule, in the civil aviation sector an economic slowdown goes hand in hand with downward trends in both the freight and passenger segments. To date this cannot be ascertained with regard to the UK. On the contrary: in 2017, around 3.4 million passengers and 2.6 million tonnes of air cargo (direct flights) were transported to the UK. In the passenger segment this represents an increase of 6 percent versus 2016. Germany was the only destination to which a higher number of passengers was transported. The figures for air cargo remained constant. The fact that passengers travelling from and to the UK accounted for more than 7 percent of the total passenger volume at Zurich Airport clearly indicates how close the economic ties are between the two countries.

UK (still) a top-ten market for all exporting industries

The situation with regard to the overall economy is also reflected in Switzerland’s main export sectors. According to a survey carried out among members of economiesuisse and statistics released by the Swiss National Bank, the UK is among the ten most important markets for almost all of Switzerland’s main exporting industries. The figures cited in Table 1 give an incomplete picture, however, because, for many sectors, conventional export trade does not encompass all business relations. This is particularly true for the services sector. For example, in the UK, like elsewhere, insurance policies from Swiss providers are concluded and held locally and are consequently not included in Switzerland’s trade balance. In 2017, Zurich Insurance alone reported premium volumes and insurance coverage in the UK totalling around 11.5 billion Swiss francs. In the banking sector, too, the reported figures do not encompass all the exported financial services.

Beyond cross-border exports, the UK is also of the utmost importance for Switzerland’s financial services sector. On the one hand, Swiss companies provide services to a significant portion of clients in the EU market through subsidiaries in London. And on the other hand, London is of major significance because of the close ties Londoners have with the Swiss Exchange, for example in the area of currency trading in euros. Of course, London is also a major centre for providing services to important overseas clients.

For the Swiss economy, the importance of the UK is even greater than the bare figures suggest. Furthermore, close ties also exist between these two highly innovative and diversified economies in the area of research and development thanks to their renowned academic institutions. The UK is also an important market for the Swiss automotive supply industry. And tourists as well as highly qualified personnel from the UK are much appreciated in Switzerland.

Although the latest figures still present a positive picture of the bilateral relations between Switzerland and the UK, various uncertainty factors make it difficult to predict future developments. This applies especially to the areas of trade and investment: here, things could go either way, depending on the outcome of the Brexit negotiations.